What is social anxiety?

Before we dive nootropics and how they can help, let’s look at what social anxiety is and what causes it.

Social anxiety is a form of fear that affects people worldwide and at least 13% of the population in the U.S alone.

While some genetic factors may play a part in forming social anxiety, it is usually rooted in the past. Bad social or emotional experiences from childhood or late teens are usually to blame.

At its core, social anxiety is your natural fight or flight response taking over when faced with social situations. The only way to overcome social anxiety is to train your mind not to react in this way automatically.

There is no magic pill to overcome shyness or social anxiety, and you will need to put in some time and effort to work on it. 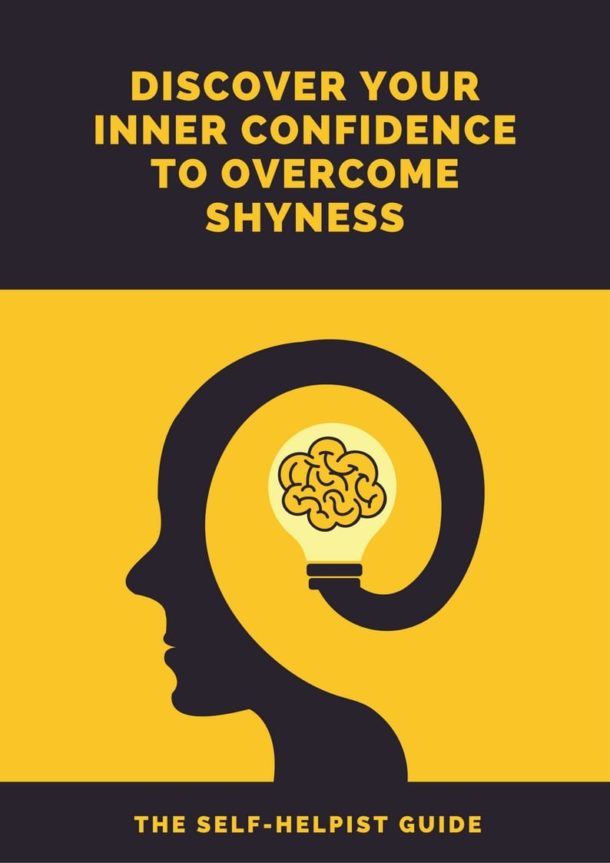 Get our free book on social anxiety

You have Successfully Subscribed!

How nootropics can help

Nootropics are so-called smart drugs that are used to enhance cognitive performance.

For those suffering from social anxiety, going into a socially challenging situation can be mentally straining. Having the right nootropics supplement can be a massive game-changer and help you ease the initial fear stopping you to face those situations.

There are hundreds of nootropics that have potential anti anxiety benefits. However, trying to figure out what woks the best for you can get overwhelming.

We have picked the top 5 best nootropics for social anxiety so you can focus on what gives you results fast.

There are more at the end of this post, but try these first and make sure you are taking your vitamins (More on that later).

Racetams are synthetic nootropics created in a lab, and they are some of the most widely used. There are four main racetams: piracetam, aniracetam, oxiracetam, phenylpiracetam.

Word of caution: Racetams may heighten symptoms of social anxiety for some individuals with its stimulating effects similar to coffee. If you suffer from severe social anxiety, this may not be the best option for you.

From the racetam family, aniracetam is the only one that has potent anti-anxiety effects, and it increases memory input/output. It’s effect to memory performance is key to better conversations.

Being able to add value to a discussion using knowledge from past and present conversations will improve your communication. This makes you more confident and leads to less anxiety in the long run.

Clinical trials suggest that use between 1,000 and 1,500 mg a day is optimal. Aniracetam is fat soluble, so take Take 500–750 mg twice a day with a bit of fat like MCT-oil to boost absorption.

The reason you feel calm after a cup of green tea is due to l-theanine found in tea leaves that relaxes and improves your focus. L-theanine is excellent with caffeine, together they increase your reaction time, memory and reduce mental fatigue.

These will all improve your social performance and give you the mental clarity to kick ass when talking to people.

For a mild dose of l-theanine and caffeine, drink tea (green or black). If you need a stronger boost, take 200 mg of l-theanine supplement with your morning coffee.

This one may seem strange, but according to Dave Asprey of Bulletproof, Nicotine is one of the best nootropics for social anxiety.

I’m not saying you should start smoking; it will kill you. Nicotine is highly addictive and cigarettes are full of toxins like tar and carbon monoxide to start with.

A small amount of nicotine, however, can be a good thing and give you mental energy to get through any social situation. Nicotine improves short-term memory, sharpens reaction time, and make you more vigilant.

You should take nicotine in very small microdoses, far less than what you would get from a cigarette. A safe amount of nicotine is about 1mg, and the best way is to use a spray or l.

Many nicotine products, like gum, are too strong and contain sweeteners and other artificial chemicals that you want to avoid.

You can read more about the advantages and drawbacks of nicotine from Dave Asprey’s Bulletproof blog.

Talking to people can be stressful, especially if you suffer from social anxiety. L-tyrosine helps your brain stay on course without getting burned out.

Suggested dosage for cognitive benefit is 500 mg – 2 grams per day. Get L-tyrosine and start with 500 mg. Listen to your body and see how you react.

Theacrine is an alkaloid found in a Chinese tea plant and it gives your brain mental clarity, similar to coffee.

Its chemical structure and effects to the brain are very similar to caffeine, it works by binding to adenosine receptors

Adenosine is a chemical that makes you feel sleepy. Like caffeine, theacrine fools your nerve cells into thinking its adenosine but instead causes your nerve cells to fire up more quickly, increasing alertness.

So why not just drink more coffee instead? Too much caffeine can give you jitters and you also build up a tolerance to caffeine over time.

A study has shown men who took 300 mg of theacrine for 8 weeks showed no signs of tolerance, measured by their energy levels, focus, and concentration.[

Take 300 mg with your morning coffee or tea. Caffeine helps your body absorb and boosts its effects.

Alcohol and other drugs

So what about alcohol and other recreational drugs?

The idea that alcohol can reduce stress is somewhat true, alcohol is a sedative and a depressant that affects the central nervous system. It can reduce fears and anxiety and help you feel less shy. In fact, alcohol’s effects can be similar to anti-anxiety medications.

Occasionally unwinding with alcohol isn’t necessarily dangerous, and alcohol can be a good social lubricant. But once you start drinking, you can build a tolerance to the de-stressing effects of alcohol. This can make anxiety and stress even more difficult to cope with.

Drinking excessive amounts have noticeable physical and mental consequences. Over time, consuming too much alcohol can lead to blackouts, loss of memory, and even brain damage. Not to mention other health problems, such as liver damage. These issues can create more anxiety as you cope with their symptoms.

An estimated one billion people worldwide have vitamin D deficiency or insufficiency. It’s been linked to Increased risk of death from cardiovascular disease, cognitive impairment in older adults, severe asthma in children and even cancer.

Needless to say, you should be taking your vitamin D whether you have anxiety or not. It is, however, possible that a deficiency of vitamin D could be linked to social anxiety too.

Study on vitamin D found that levels of calcidiol (a product of vitamin D produced in the body) were lower for patients with anxiety disorders.

Omega-3 fatty acids are present in krill oil and other fish oils. Over the years, researchers have ascribed a wide range of health benefits to them. But in recent years, scientists have tested their potential to help in the treatment mood and anxiety disorders.

Data from 19 clinical trials including a total of 1,203 participants published in the JAMA Network Open journal, supported the initial theory. Although the studies varied significantly, they saw a significant reduction in anxiety in the groups treated with omega-3s compared with the placebo groups.

Most of the studies demonstrated a positive effect of omega-3 PUFAs on anxiety and the combined effect was statistically significant when the data were pooled,

B vitamins are essential nutrients necessary to maintain healthy body and brain functions. This study shows that essential B vitamins along with fatty acids and zinc may be helpful in reducing stress and anxiety related to menopause and premenstrual syndrome in women. Researchers suggested the B-Vitamins might work on stress by decreasing secretion of salivary cortisol.

Specifically, nootropic vitamin B6 has been suggested to help soothe symptoms of anxiety in elderly women.

Vitamin B9 (folate) is used by your brain to make and serotonin. Folate is involved in gene expression, amino acid synthesis, and myelin synthesis and repair. It’s even involved in cerebral circulation. Powerful anti-anxiety treatment in this B-vitamin.

Vitamin B 12 plays a key role in the efficient conversion of carbohydrates to glucose. It also helps your body convert fatty acids into energy. Supplementing with Vitamin B12 can help lower anxiety, and elevate alertness, cognition, energy, vision, elevate mood and relieve insomnia. No more mood swings!

Studies show magnesium plays a role in keeping anxiety at bay through its modulation of neuronal receptors, neurotransmitters, and hormonal activity within anxiety-related brain regions.

In addition to influencing the activity of the central stress response system, brain areas associated with anxiety include the amygdala, the hippocampus, and the ventromedial prefrontal cortex.

Other nootropics to consider

Finally, we’ve covered the low hanging fruits now, and you should be on your way to a great start with the nootropics listed above.

urthermore, if you are hungry for more, I’ve listed some other nootropics that have shown potential as a nootropic for social anxiety.

This natural adaptogen has been used since ancient times to treat anxiety, depression, and stress. It protects your neurons and balances neurotransmitters. It also has shown to have little to no side effects, making it extremely safe.

Phenibut is a GABA agonist and primarily binds to the GABA-b receptor. GABA-a receptor agonists include alcohol and benzodiazepines. As a result, phenibut can have a sedative effect and has strong anti-anxiety qualities. Even more, It can be used to combat depression, improve mood, cognitive function motivation.

Cacao and dark chocolate (75%+ cacao) stimulates the release of phenylethylamine which improves focus and awareness. And anandamide (the bliss molecule) which helps you feel good.

Cacao is also a source of tryptophan which is the precursor to serotonin. Also theobromine which boosts blood flow is a stimulant and may account for chocolate’s aphrodisiac qualities.

In addition to this, clinical studies have shown Ashwagandha to repair and even reverse damage in the brain caused by chronic anxiety and stress.

We have used this tree native to for thousands of years to boost mental alertness, improve cerebral circulation and for overall brain function. Many have found Ginkgo to be very effective in reducing stress and anxiety. And boosting mood.

Gotu kola is one of the essential herbs in ancient Ayurvedic medicine. It can help boost nerve growth factor and lead to a profound effect on anxiety

kola may even be more effective in reducing anxiety and relieving stress than Ashwagandha.

In South Pacific, the islanders use kava for its sedative effects. It can help reduce anxiety and improve mood. In comparison to benzodiazepines, studies show kava may boost cognitive function.

Lemon balm is well known for its anti-anxiety effects. To summarize, rosmarinic acid is a compound found in the lemon balm that inhibits the GABA transaminase enzyme. Therefore, this helps maintain adequate levels of GABA in your brain, resulting in a calming effect.

As a result, it can help depression and anxiety, improve focus and thinking, repair brain cells. It can also help manage other neurological problems like Alzheimer’s, dementia, Parkinson’s and muscular dystrophy.

Phosphatidylserine may help soothe social anxiety by counteracting stress in the body. Specifically, phosphatidylserine has proven to reduce the effects of exercise-induced stress caused by cortisone release in males

When it comes to women, PS may lead to a decrease in symptoms of anxiety and more interest in socialization for the elderly.

Rhodiola rosea is an herbal adaptogen that can help women soothe symptoms of social anxiety. While it is excellent for reducing stress and improving performance, it has also shown promise for reducing signs of stress associated with generalized anxiety.

Keep in mind that general anxiety is different from social anxiety.